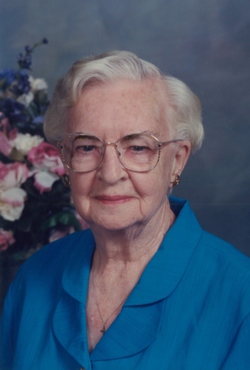 Mrs. Coykendall was born on March 24, 1919 on the family farm three miles east of Camargo IL. She was a daughter of Ernest and Grace (Bagley) Sinclair. She married Marvin Coykendall on December 21, 1941 in Charleston, IL. He preceded her in death on April 1, 1983.

She was preceded in death by her parents, her husband, Marvin, her daughter, Linda, her son Dennis, one sister, Doris Wiley and two brothers Don Sinclair and Rex Sinclair.

Frances got her early education at Harmony School, a small country school east of Camargo. She attended Camargo high school for two years and graduated from Villa Grove High School in 1936. She had a keen interest in horses and horse shows and enjoyed trips to the Arthur Amish community to watch the draft and buggy horses. She enjoyed playing the piano, crafts, quilting, sewing and cooking. She especially enjoyed nature, animals and birds.

Mrs. Coykendall was a member of the Camargo United Methodist Church, where she was their regular pianist up until May of this year. She was also a member of various church and club organizations and she was a charter member of Douglas County Crime Stoppers. She was a farmwife. When her children were young, she was active with the church youth groups, youth choir, and severed as a Sunday school teacher. She retired from Camargo Post Office having served 12 years as Post Mistress working in the 70s and 80s.

Mrs. Coykendall was honored to be the grand marshal of the 2008 Camargo Woolly Worm Festival. A real highlight was the surprise celebration given in honor of her 90th birthday in March 2009. She loved her family and friends and will be deeply missed by all whose life she touched.

In lieu of flowers, Memorials may be made in her name to the Camargo United Methodist church, P.O. Box 229, Camargo, IL 61919.

To order memorial trees or send flowers to the family in memory of Frances Coykendall, please visit our flower store.
Send a Sympathy Card