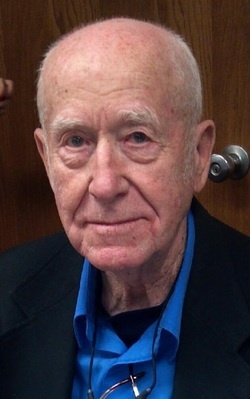 Forrest Ferguson of Sullivan, aged 87 years, 1 month and 17 days, passed on to his eternal home on Friday December, 20, 2013 at 4:56 P.M. at Mason Point in Sullivan. He was surrounded by a host of supportive members of his family whom bid him farewell through tears of sorrow and grief as he passed from this life to eternity.

A Funeral Service to honor his life will be held on Tuesday December 24, 2013 at 10:00 A.M. at the Lake Land Church of Christ in Mattoon where his son David Ferguson has Ministered and preached since 2003. This building is located south of Mattoon on Rt. 45 and across from Lake Land College. Minister Ron Bartenan will officiate. Burial with Military Rites will be at the Ash Grove Cemetery in Rural Shelby County, Illinois. A Visitation will be held from 5:00 P.M to 7:00 P.M. on Monday December 23, 2013 at the Lake Land Church of Christ in Mattoon. Edwards Funeral Home of Arcola has ministered to the family of Forrest and Jackie Ferguson and will be assisting with the funeral arrangements.

Forrest was born on Wednesday November 3, 1926 in Big Springs Township in rural Shelby County, Illinois. He was the son of Gus and Mary (Corkwell) Ferguson and his birth on that autumn day marked the final addition to the Gus and Mary Ferguson family. On Monday October 1, 1951, in the formal Living Room of the home of Leonard and Gracie Bilyeu of Florissant, Missouri, he married Jacqueline ‘Jackie’ Futrell, whom had been lovingly fostered by the Bilyeu’s; Forrest and Jackie’s marriage, lasted 62 years and Jackie survives.

Forrest served his Country both honorably and courageously in the US Army serving in both World War II and the Korean War.

Forrest was affectionately known locally as ‘the Greeter who tells the jokes’ at the Mattoon Walmart store, where he worked for more than 19 years throughout his ‘retirement’. He held numerous occupations throughout his life including but not limited to time as a farmer, a Deputy Sheriff in Moultrie County, a custodian throughout the Sullivan Community School system, a machinist at the Brach’s candy factory in Sullivan, a night watchman, a service attendant at the old Platolene 500 gas station in Sullivan and in most recent years, a greeter at the Mattoon Walmart store.

Forrest, who often answered to the nicknames of both ‘Woody’ and ‘Frosty’, loved meeting and greeting people. He loved spending time with his family and friends and he looked for opportunities to make people smile and have a good laugh. He never met a stranger.

Giving us one final metaphor pointing to the selfless spirit of the man, in lieu of flowers, Forrest asked that donations be made to the Walmart Children’s Miracle Network.