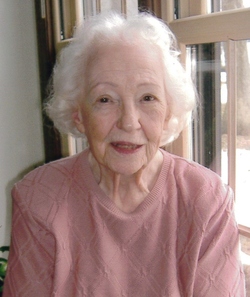 Florence Opal (Garrett) Shutt was born on March 5, 1917 in Rural Douglas County, Illinois. She was a daughter of James (Jimmy) Garrett and Emily (Peddycoart) Garrett. She was the 3rd of 5 Garrett sisters.

Funeral services will be held at 11:00 A.M. on Friday, April 7, 2017 at the Edwards Funeral Home in Arcola, IL. Pastor Sue Buttry will officiate. Burial will be held in the Tuscola Township Cemetery. Visitation will be held one hour prior to the service at the funeral home.

Florence is survived by a sister Betty Pflum of Tuscola and many nieces and nephews.

Florence attended one-room schools in rural Douglas County, including South Ward School. She graduated from Tuscola High School in 1934. When she started in school, there were no other 1st grade students at the one-room country school she attended so she skipped 1st grade and began her schooling as a 2nd grader, thus she graduated a year early.

After studying at EIU in Charleston, IL, Florence earned her Teaching Certificate and began her a 10-year teaching career at various one-room country schools in rural Douglas and Coles Counties including the Galton School and the Hickory Wythe School.

She married William ‘Glenn’ Shutt in Indiana on September 4, 1938. They were married for 64 years. Glenn passed away on Christmas Day, December 25, 2002. They had one son, James William Shutt whose brief life began and ended on August 11, 1954.

Not long after WWII had ended, Florence and Glenn relocated to Indianapolis, Indiana where Glenn worked as a school Principle in the Indianapolis School system. Florence spent 28 years working for The E A Kinsey Company where she quickly became the Company’s Office Manager at their Indianapolis Division.

In 1978, Florence and Glenn retired, moving to the Country Club Estates neighborhood in rural Douglas County near Arcola. Florence had an amazing understanding of animals and did numerous pet rescues down through the years of her life. She often cared for various pets throughout the neighborhoods wherever she lived and during her life, she became a pet consultant for many of her relatives, neighbors and friends.

Florence enjoyed recalling accounts of her days as a one-room school teacher as well as her personal accounts of various historical events from her lifetime including her rural upbringing during the 19’teens and 1920’s, the great depression of the 1930’s, the outbreak of WWII in 1941 and living as a spouse of a soldier during this war, the rapidly changing 1950’s, and the day of the JF Kennedy assassination on November 22, 1963.

Florence possessed a very caring, giving heart and often helped not only family and friends but also total strangers whose lives happened to intersect with hers during a moment of great need.

Memorials may be made to the Bourbon Baptist Church, Douglas County Museum or to the Donor’s Choice.

To order memorial trees or send flowers to the family in memory of Florence Shutt, please visit our flower store.
Send a Sympathy Card