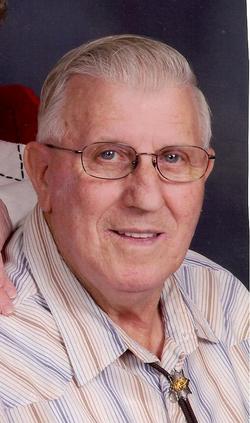 A memorial service will be held at 11:00 A.M. on Friday, May 9, 2014 at the Arcola United Methodist Church. Rev. Vince Rohn will officiate. Burial will be in the Arcola Cemetery. The Edwards Funeral Home is assisting with arrangements.

Memorials may be made to Shammy’s family.

Shammy was born on June 18, 1934 in Chesterville, IL. He was a son of john and Bessie (Campbell) Shambarger. He married Doris Marie Helmuth on February 25, 1956.

He was preceded in death by his parents, one daughter, Connie Shambarger, one grandson, Mikey R. Grawet, two brothers, Orville and Hiram Scott and two sisters, Gladys Turner and Agnes Voltenburg.

Shammy had been an auto mechanic nearly his entire life. He worked as a mechanic for Otto Cuppy and later for Aschermann Ford in Arthur, IL. He worked with Jerry Titus at Shammy and Jerry’s garage in Arcola, IL for several years and most recently he owned and operated “Shammy’s Shade Tree” where he did mechanic work for many local residents from his garage until he retired.

Shammy also had a love for music, playing in several bands and jam sessions with friends. He wrote and was famous for his tribute song to Arcola called “Exit 203” and “My Dog Joe”

To order memorial trees or send flowers to the family in memory of Eugene Shambarger, please visit our flower store.
Send a Sympathy Card