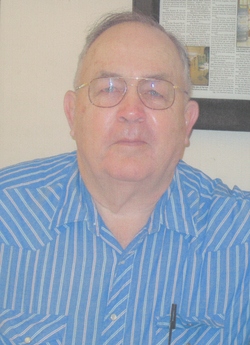 A Graveside service with military rites conducted by the Atwood American Legion will be held at 4:00 P.M. on Saturday, May 14, 2016 in the Mackville Cemetery in Atwood, IL. Rev. Jerry Conner will officiate. The Edwards Funeral Home is assisting the family with arrangements.

Ernest was born on August 23, 1929 in Silverdale, KS. He was a son of Delbert and Lola (Gilmore) Utt. He married Mary Jordan. He then married Patricia Wolford; she passed away on February 23, 2006.

He was preceded in death by his parents, wives, Mary Utt and Patricia Utt, one son Ernest Utt Jr., one brother, Albert Utt and one sister Wilma Miller.

Ernest grew up in the country plains of the Midwest with his four siblings. During his school years at Winfield High School he was a pitcher on the school baseball team among many other activates.

After school Ernest went on to serve in the United States Army during the Korean War where he was stationed in France and Germany.

Ernest had retired from Mueller Company in Decatur, IL after working there for over 34 years.

He loved rooting for the St. Louis Cardinals (traveling multiple times to see the games), bowling, and visiting with his children, grandchildren, family and friends. He graced the world with a sense of a “gentle giant”, as he was relaxed, humorous and giving to those he met. His presence will live on through those he loved and touched in his life.

In lieu of flowers, memorials may be made to Carle Hospice.

To order memorial trees or send flowers to the family in memory of Ernest Utt Sr, please visit our flower store.
Send a Sympathy Card