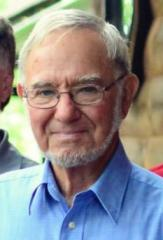 Edward farmed until 1984.  After farming he worked as a welder at EZ Trail and most recently at CHI.  He also operated a commercial cleaning business for 12 years, “Kauffman’s Janitorial Service”.  From 2003 to 2006 he and Anna operated a Bed and Breakfast in Middlebury, IN   He and Anna have spent the past 10 winters in Phoenix, AZ.

To order memorial trees or send flowers to the family in memory of Edward Kauffman, please visit our flower store.
Send a Sympathy Card