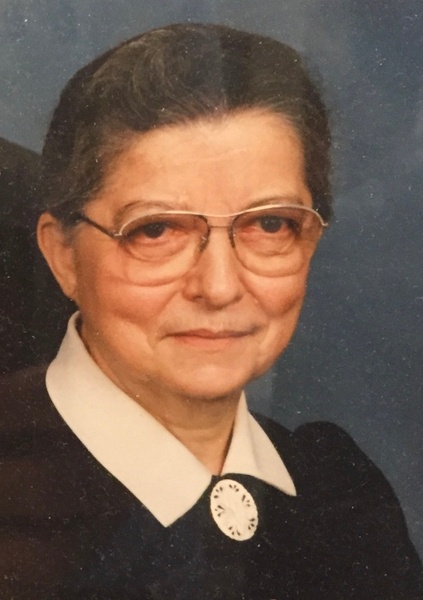 Edna L Helmuth, 97, of Harrisonburg, Virginia (formerly of Arthur, IL) passed away on Saturday, August 24, 2019 (two days before her 98th birthday) at Virginia Mennonite Retirement Community, where she was a resident for the past nine years.

She was born on August 26, 1921 in Arthur, IL to Levi A and Anna (Yoder) Miller and attended the Yoder School near Arthur, IL. On December 16, 1943, she married Noah B Helmuth.  In December 2018 they celebrated their 75th wedding anniversary.

Edna was a stay-at-home mom through their early years of marriage and helped her husband on the dairy farm.  In 1965, she became the bookkeeper at M&H Equipment, which became Helmuth Implement in 1966 when Noah and Edna bought out another business partner. With an already full life, in 1972 Noah and Edna began their involvement with Chicago Community Chapel.  When Noah became the pastor, Edna found many ways to be supportive including teaching Sunday School and hosting family, friends and guests in their home.  Their pastoral journeys also took them to Cazenovia Mennonite Church (Cazenovia, IL), Roanoke Mennonite Church (Roanoke, IL), East Peoria Mennonite Church (East Peoria, IL), East Union Mennonite Church (Kalona, IA), and Stuarts Draft Mennonite Church (Stuarts Draft, VA).  Edna also served as the first manager of SelfHelp Village Crafts in Champaign, Illinois for five years.

In 2002 Edna and Noah retired and moved to Harrisonburg, VA to live closer to family. She was a member of the Harrisonburg Mennonite Church.

A memorial service will be held in Detweiler Auditorium at Virginia Mennonite Retirement Community, Harrisonburg, VA on Sunday, September 1 at 4:30 PM with Eric Martin and Craig Maven officiating.

To order memorial trees or send flowers to the family in memory of Edna Helmuth, please visit our flower store.
Send a Sympathy Card