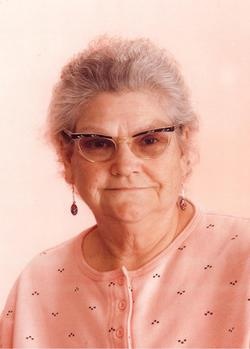 Funeral services will be held at 10:00 A.M. on Saturday, October 26, 2013 at the Edwards Funeral Home, 221 East Main in Arcola, IL. Pastor Derold Doughty will officiate. Burial will be in the Mound Cemetery in Charleston, IL. Visitation will be prior to the funeral at the funeral home.

Edna was born on July 18, 1925 in Charleston, IL. Her parents were Kathryn Pearcy Moses and Guy Warren. She was raised with her brothers by their Mother and stepfather, Howard Moses.

Edna retired from Brown Shoe Factory in Charleston, IL in 1990. After she retired she was a homecare helper. She loved to play bingo, fish, travel, and spend time with her family. Edna was a member of the VFW Women’s Auxiliary and the Moose.

In lieu of flowers, memorials can be made to the Farmer City Rehab & Health Care Center, 404 Brookview Drive in Farmer City, IL 61842.

To order memorial trees or send flowers to the family in memory of Edna Bettinger, please visit our flower store.
Send a Sympathy Card