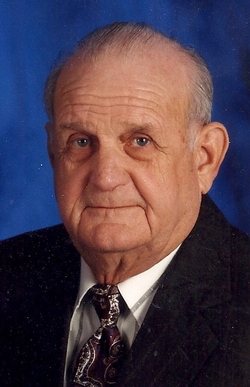 
Funeral services will be held at 11:00 A.M. on Monday, February 13, 2017 at the Edwards Funeral Home in Arcola, IL. Pastor Bill Ramsey will officiate. Burial will be in the Arcola Cemetery. Visitation will be held one hour prior to the service from 10:00 A.M. to 11:00 A.M. at the funeral home.


He is survived by his wife: Wanda of 70 years, of Arcola, IL; one son: Jerry Clark Titus and his wife Sharlene of Arcola, IL; and a very faithful friend: Gene Sylvester of Arcola.


Eddie was a Navy Veteran of WWII.


Eddie had worked as a welder at Progress Industries and Bulk Tek and in maintenance at Cabot.


Eddie was a devoted husband to Wanda; he always took care of her, he was always at her side and always there to protect her.


He enjoyed woodworking, working with leather and he could do just about anything.


Jerry and Sharlene would like to send many, many thanks to the Arcola Health Care Center and staff for how great they have treated the family over the past four years.


Memorials may be made to the Arcola Health Care Center.

To order memorial trees or send flowers to the family in memory of Eddie Titus, please visit our flower store.