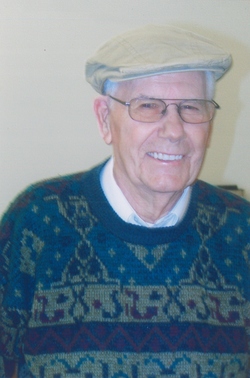 DONALD (DON) RHODES, 94, of Arcola, IL passed away at 3:37 P.M. on Tuesday, August 30, 2016 in Arcola, IL.
Don was born on March 8, 1922 to Earl U. and Alice (Bieber) Rhodes in Effingham County, IL. He married Phyllis Wentworth in May, 1948 in West Frankfort, IL. She passed away in July, 1986.
Don and Phyllis had three children, Linda (Jack) Green of Eureka, IL, Don “Dusty” (Luana) Rhodes of Cape Girardeau, MO, and Pat (Ken) Sargent of Tuscola, IL. He is also survived by seven grandchildren, Kelly (Dan) Hadfield and Travis McCollum (Chevi Guthrie) All of Eureka, IL, Austin Rhodes of Seattle, WA, Emily (Rick) Griffin of Millersville, MO, Bethany (David) Preusser of Jackson, MO, Cathy (Chris) Matheny of Charleston, IL, and Keith Sargent (Gabrielle Corcoran) of Elburn, IL, ten great-grandchildren, five great-great-grandchildren, a sister-in-law, Anna Jean Rhodes of St. Elmo, IL and several nieces and nephews.
In November, 1987 he married Peggy Ashmore of Oakland, IL. She survives. Don is also survived by two step-children, Roger (Rhoda) Ashmore of Oakland, IL and Sherri (Mike) Duzan of Kansas, IL, six step-grandchildren, eleven step-great-grandchildren and a step-daughter-in-law, Noky Ashmore of Monticello, IL.
He was also preceded in death by his parents, his brother, Phillip Rhodes of St. Elmo, IL, his sister, Zona Beck of Forsyth, IL, a brother-in-law, Glen Beck missing in action in 1943 and a stepson, Mike Ashmore of Monticello, IL.
Don was in the United Stated Army Air Corps from 1942 to 1947, a 1st Lieutenant Bomber pilot in The Pacific Theater and flew B-24 Bombers. Following his discharge from the service, he began working construction. He also worked at Ashland Oil & Refinery in St. Elmo, IL and then was employed as a General Maintenance Superintendent at USI/Quantum Chemical Plant in Tuscola, IL from 1952 until he retired in 1988. He was active in the Arcola Lions Club, Masonic Lodge #366, VFW, American Legion and the Tri-County Shriner’s Club. Don was also a member of the Arcola United Methodist Church.
His hobbies included flying remote controlled airplanes and he was a master craftsman, working in his shop with metal and woodworking tools.
Funeral services will be held at on Saturday, September 3, 2016 at 10:30 A.M. the Edwards Funeral Home, 221 East Main St. in Arcola, IL. Rev. Donald Winch will officiate. Burial with Military Rites conducted by the Arcola VFW and the Arcola American Legion will be in the Arcola Cemetery. Visitation will be held from 5:00 P.M. to 7:00 P.M. on Friday, September 2, 2016 at the funeral home. Masonic Rites conducted by the Arcola Masonic Lodge 366 A.F. and A.M. will be held at the close of the visitation.
In lieu of flowers, memorials may be made to Shriners Hospitals for Children, 4400 Clayton Ave, St. Louis, MO 63110.

To order memorial trees or send flowers to the family in memory of Donald Rhodes, please visit our flower store.
Send a Sympathy Card