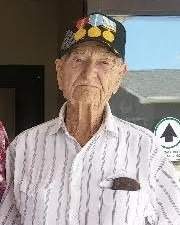 A graveside memorial service with Military Rites conducted by the Arcola VFW and the Arcola American Legion will be held at 2:00 PM on Monday, September 26, 2022 in the Arcola Cemetery.

He was preceded in death by his parents, his wife and one sister, Eva Richey.

Don was an Army Veteran of the Korean War and received three Bronze Stars.

Don was an engineer for the Pan Handle Eastern Pipeline for 37 years.

Memorials may be made to the Tuscola Volunteer Fire Department or the local VFW.

To order memorial trees or send flowers to the family in memory of Donald E. Kroll, please visit our flower store.