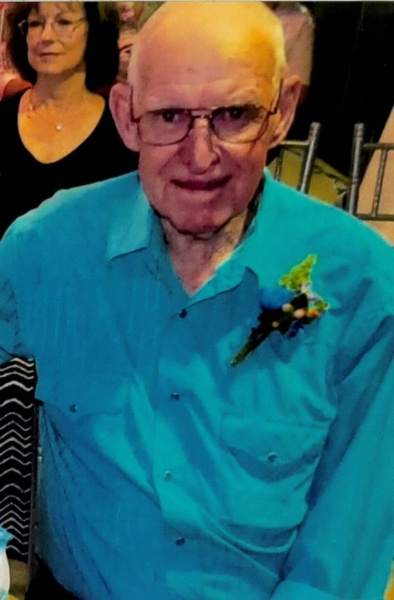 Wayne was born on October 26, 1930 in Moultrie County near Bruce, IL. He was a son of Fred B. and Laura Mae (Pierce) Goodwin.  He married Mary Charlene Schrock on January 9, 1951 in Charleston, IL.

He was preceded in death by his parents, two brothers, Noel S. Goodwin and Ralph L. Goodwin.

Wayne was a 1948 graduate of Humboldt High School.   He was a Navy Veteran of the Korean War.

He retired from Panhandle Eastern Pipeline in Tuscola, IL in 1988 at the age of 57, he had worked there for 33 years.

After Wayne retired from Panhandle he helped Steve Warters farm for 14 years, Joe and Phil Kappes for 3 years; he drove a truck and tractor for Jim Baird for 4 years; he worked a few more years for Mark and Mike Brian until he fully retired in 2012.

Wayne held the track record for Mule Races in 1953 and 1954 at the Coles County Fair as well as the Moultrie Douglas County Fair.   It was a “Hully Gully” bare back race and he rode Peter the Great his favorite mule that he just called Pete.

Wayne also had a pony pulling team, he was an assistant 4-H leader while his children were growing up and they were involved in the 4-H Horse Club.

He enjoyed spending time with his family and friends, traveling with his wife of 68 years and always looked forward to drinking coffee, in fact he used to always say “He never drank coffee unless he was by himself or with somebody.”

To order memorial trees or send flowers to the family in memory of Donald Goodwin, please visit our flower store.