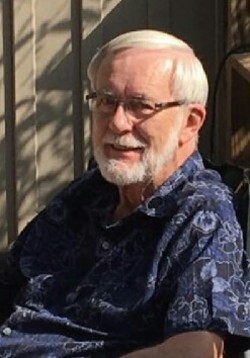 He was preceded in death by his parents and one step-son, Tony Bontreger.

Dave was an Army Veteran of the Vietnam War.

Dave was an Advertising and Marketing Specialist. He worked with Paul Schrock for several years starting at Schrock Cabinets in the early 70s and most recently at the Chesterville Antique Mall.

Dave was a music aficionado, enjoyed playing the guitar, and played bass guitar, lead guitar and sang vocals for several bands, beginning in the late 60s, and throughout his life. He truly appreciated the fine arts, and was an avid art collector. He was also a “Grill Master” and would cook out on the grill nearly every night.

A memorial service will be held at 2:00 P.M. on Friday, December 23, 2016 at the Best Western Hotel and Convention Center, 917 Green Mill Village Road in Arcola, IL. Rev. Rob Betts and Rev. Ronald Sparks will officiate. Following the memorial service, a lite meal will be served that will help to kick off a good old fashioned “Jam Session” in honor of Dave, featuring many of his good friends and family members. Burial will be held at a later date in the Arthur Cemetery.

Memorials may be made to:

To order memorial trees or send flowers to the family in memory of Dave Breedlove, please visit our flower store.