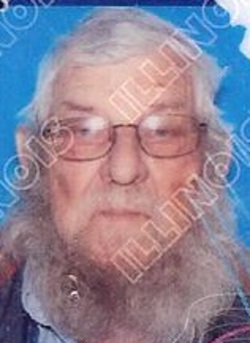 
COLLIN “CORKY” CAIN, 77, of Arcola, IL passed away at 9:15 P.M. on Saturday, October 26, 2013 at St. Francis Medical Center in Cape Girardeau, MO.
A memorial service will be held at a later date. The Edwards Funeral Home is assisting with arrangements.

Corky was born on December 24, 1935 in Carbondale, IL. He was a son of Pinkney Moses and Barbara Gertrude (Hummel) Cain. He married Beverly “Susie” Stewart, his wife of 49 years, on August 1, 1964 in Oakland, IL.
He is survived by his wife Susie Cain of Arcola, IL; one daughter, Kim Cain of Arcola, IL three grandchildren, Jordan Beck (Merissa Mace), Kody Beck (Haley Logan) and Taylor Mayhood; one great granddaughter, Sophia Beck; one brother, Clifford Cain (Clara) of Ware, IL and one sister, Shirley Waldrop (John) of Tuscola, IL.

He was preceded in death by his parents, three children, Sabrina, Kathy and Dennis Cain, four brothers, Junior, Don, Ron and Calvin Cain and one sister, Maxine Cox.

Corky retired from General Electric in Mattoon, IL after 25 years of service.
Hunting and fishing were two of his greatest passions. One of his greatest accomplishments was teaching his grandsons how to be great hunters. His granddaughter Taylor was his “Taybug”. He spent his last four months with his newest little rug-rat Sophia and he spent his days with his future granddaughter-in-law, Hayley.

He had numerous furry friends over the years that invaded his home; most especially Gizmo, Pumpkins and the ones that were still with him, Lilly and Cat-dog.

He had many nieces and nephews that loved their “Grumbling Uncle Cork” and some very special friends, Gene Allen, Carl VanDeveer, Leonard Roberts and Kenny Wheeler.

To order memorial trees or send flowers to the family in memory of Collin Cain, please visit our flower store.
Send a Sympathy Card