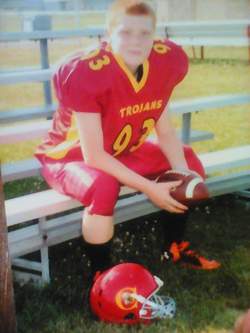 A Funeral service will be held at 6:00 P.M. on Thursday, June 30, 2016 at the Edwards Funeral Home, 221 East Main St. in Arcola, IL. Rev. Brent Budd will officiate. Visitation will be held two hours prior to the funeral, from 4:00 P.M. to 6:00 P.M. at the funeral home. A memorial will also be held at 3:30 P.M. on July 8, 2016 at the JFL Football field in Charleston, IL to let balloons off in memory of Christopher. The Edwards Funeral Home is assisting with arrangements.

Christopher was born on June 9, 2001 in Duniden, FL. He was a son to Christopher Lee West and Jill (McCartney) McElwee.

He was preceded in death by his father, Christopher Lee West.

Christopher was an 8th grade Graduate from Arcola Junior High. He was a member of the Charleston JFL team, number 93, until he moved to Arcola to become a Purple Rider. Football was his life. Christopher was always there for anyone especially his mother.

To order memorial trees or send flowers to the family in memory of Christopher West, please visit our flower store.
Send a Sympathy Card