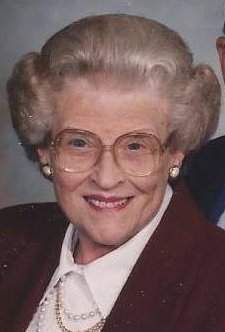 Graveside funeral services were held at the Concordia Cemetery in Hammond, IN at 2:00 P.M. on Saturday, October 13, 2018.   Rev. Michael Pennanen officiated.   The Edwards Funeral Home assisted with arrangements.

She is survived by her son, Mark Thomas Ellis and his wife Karen (Dunlap) Ellis of Dalton City, IL; three grandchildren, Renee Weaver and her husband Andrew of Naperville, IL, Christine Weatherington and her husband Cee of The Colony, TX, and Michael Ellis of Dalton City, IL; two great-grandsons, Derek Weatherington and Lucas Weaver.   Charline also has one great-granddaughter on the way.

She was preceded in death by her parents and her brother, Jack Groth.

Charline was active in the Lansing Jr. Women's Club, was an active bridge player, and served as an election judge.

At church, she served as a deacon, was active in the arts & crafts, and sang in the choir.

Charline enjoyed cooking, baking, and spending time with family.  Her grandchildren were always her delight, and she enjoyed doing fun things with them.

To order memorial trees or send flowers to the family in memory of Charline Ellis, please visit our flower store.