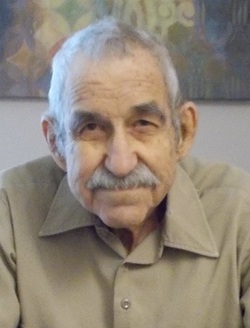 Charles was born on October 16, 1924 in Baylis, IL. He was the son of Walter and Ermyn (Askew) Sykes, descendants’ of the early settlers of Beverly Township in Adams County. He married Rachel Cuppy of Humboldt, IL on June 16, 1951 in Arcola, IL. She passed away on October 9, 2010.

Mr. Sykes grew up on the family farm between Beverly and Baylis, attending the local country grade school and graduating from Barry Community High School in 1943; after which he served in the U.S. Navy until the end of WWII. In 1950 he graduated from the College of Agriculture, University of Illinois and after teaching vocational agriculture in Wisconsin, and Illinois for several years, he served as District Conservationist with the USDA Soil Conservation Service in Henderson, Scott, Brown, Calhoun and Jersey Counties in Illinois. He retired from that position in 1983. He then farmed the home farm in Adams County until 1996 and until his death he enjoyed an active life of retirement by occasionally traveling and attending to various farming and other interest such as bee keeping. He maintained an active membership in the First United Presbyterian Church of White Hall, IL and the White Hall Lodge 80 A.F and A.M. until moving to Decatur, IL in 1989. He later would move to Humboldt, IL and attended the Humboldt United Methodist Church.

He was preceded in death by his parents, his wife, Rachel, one grandson James Sykes, and infant brother, Paul Sykes and two sisters, Ruth Brown and Ada Pearn.

Mr. Sykes enjoyed life and had remarked that when the call came for him to at last lay down the working tools of life, he would not feel deprived of any of God’s blessings, but with joy would obey the summons from his labors on earth to eternal refreshment in the paradise of God. On March 25, 2016 he obeyed that summons.

Visitation will be held from 10:00 A.M. to 11:00 A.M. on Tuesday, March 29, 2016 at the Edwards Funeral Home, 221 East Main in Arcola, IL. Funeral services will be held on Tuesday, March 29, 2016 following the visitation. Rev. Mitch Ramey will officiate. Burial will be in the Arcola Cemetery. Masonic rites will be conducted by the Arcola Masonic Lodge 366 A.F. and A.M.

Memorial may be made to the Humboldt United Methodist Church.

To order memorial trees or send flowers to the family in memory of Charles Sykes, please visit our flower store.
Send a Sympathy Card