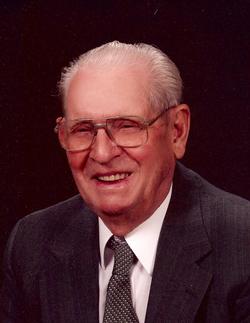 Funeral services will be held at 10:00 A.M. on Monday, November 16, 2015, at the Arcola United Methodist Church, 121 South Locust Street in Arcola, IL. Rev. Vince Rohn will officiate. Burial with military rites conducted by the Arcola VFW and the Arcola American Legion will be in the Cartwright Cemetery in rural Tuscola, IL. Visitation will be held from 4:00 P.M. to 7:00 P.M. on Sunday, November 15, 2015, at Edwards Funeral Home, 221 East Main Street in Arcola, IL.

Charlie was born October 21, 1922, in rural Tuscola, IL. He was the son of James Alfred and Cynthia Ellen (Houser) Rairden. He married Mabel Juanita Brann on January 1, 1947, in Tuscola, IL. She preceded him in death on September 1, 2006.

He was preceded in death by his parents, his wife, Juanita, and three sisters, Margaret Greve, Mary Buoy and Paulene Pearson.

Charlie was a 1940 graduate of Tuscola Community High School. He served in the United States Army Air Corps during WWII and attained the rank of Staff Sergeant. While overseas he spent most of his time at Assam, India, where he serviced and changed engines in C-46 and C-47 planes, which flew cargo and passengers over “The Hump” into China.

After serving his country from 1942 to 1945, Charlie returned to Douglas County and farmed until his retirement. He was a Douglas County Farm Bureau member, a 4-H club leader and served on the board of directors for Arcola Co-op Grain Company.

Charlie and Juanita were Habitat for Humanity home builders in Charleston, SC, and Montgomery, AL.

Memorials may be made to the Arcola United Methodist Church of Arcola, IL or The Arthur Home in Arthur, IL.

To order memorial trees or send flowers to the family in memory of Charles Rairden, please visit our flower store.