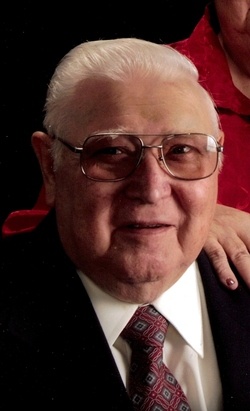 Visitation will be held from 4:00 P.M. to 8:00 P.M. on Monday January 2, 2017 at the Edwards Funeral Home, 221 E. Main St. in Arcola, IL. Funeral services will be held at 10:00 A.M. on Tuesday, January 3, 2017 at the Vine Street Christian Church, 249 S. Vine St. in Arthur, IL. Pastor Paul Fraser will officiate. Burial with military rites conducted by the Arthur American Legion and the Arthur VFW will be in the Arthur Cemetery.

He was preceded in death by his parents and one brother-in-law, Don Porter.

After the Military, Charles worked for his Grandpa Hacker out of Charleston working in construction. Charles retired from P.P.G. Industries after 38 years of service. After retiring he went to work at Rockome Gardens for ten years driving the train, giving buggy rides and working the buzzsaw. He also operated an appliance repair business for several years.

Charles was a member of the Vine Street Christian Church. He was also a member of the Arthur American Legion Post 479, the Arthur VFW Post 11456 and the United Steel Workers of America Local 193 out of Mt. Zion, IL. He was a Past Scout Master for Boy Scout Troop 74 of Arthur, IL.

Charles enjoyed scouting, fishing, camping, working on cars, puttering around in the garage and spending time with his family especially his grandchildren.

Memorials may be made to the Vine Street Christian Church or to the Arthur Boy Scout Troop 74.

To order memorial trees or send flowers to the family in memory of Charles Goodman, please visit our flower store.
Send a Sympathy Card