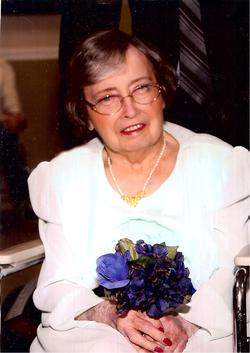 BETTY JANE ARMSTRONG, 87, of Mattoon, IL formerly of Carthage, IL passed away at 3:25 P.M. on Wednesday, December 3, 2014 at Mattoon Health Care Center, after a long battle with Parkinson’s disease.

Betty was preceded in death by her parents, her husband, a twin sister, a daughter, Jane C. Bartels and a son-in-law, James Bartels.

Betty graduated from West Frankfort High School. She attended the University of Illinois and was a member of the Tri Sigma Sorority. She began teaching in a one room schoolhouse in rural Carthage, IL. After raising her family she returned to teaching in Ferris, IL. Betty was member of the Carthage United Methodist Church. She enjoyed spending time at the family cabin at Midland Hills Country Club in Makanda, IL where she was also a member. She was a member of the Benevolence Protective Order of the Elks Lodge 1243 of Carbondale, IL and the Audubon Society. She was an accomplished Bridge player and astute bargain hunter. Betty will always be remembered as a loving, caring and giving person who enjoyed spending time with her family and friends.

In lieu of flowers memorials may be made to Parkinson’s Disease Foundation, 1359 Broadway Suite 1509, New York, NY 10018

To order memorial trees or send flowers to the family in memory of Betty Armstrong, please visit our flower store.