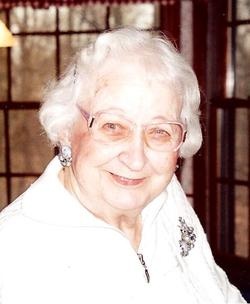 Mrs. Daum was born on November 3, 1918, near Allenville, IL. She was the third daughter born to Scott and Clara (Buser) Chaney. Her early years were spent living in the Allenville, IL and Sullivan, IL areas where her father farmed. Her love for the outdoors and animals started as a young girl. She spent many hours playing with the family dogs and riding her beloved pony, Easter. Mrs. Daum met her future husband, Chester H. Daum, at East Hudson, a rural school in Moultrie County, near Sullivan, IL. They were married March 25, 1940 in Sullivan, IL. He preceded her in death on September 7, 1979.

Mrs. Daum and Chester farmed near Jonathan Creek, west of Sullivan, IL before they moved to Arcola, IL on January 1, 1949. They farmed northwest of Arcola, IL and moved into Arcola, IL on December 1, 1977. Mrs. Daum lived in the same house with her beloved cats and dogs until after her 90th birthday. She moved to Mason Point, near Sullivan, IL in 2008.

She was a member of the Arcola United Methodist Church where the pies that she made for potlucks were always a favorite. She loved gardening and delighted neighbors with her beautiful blue and pink hydrangea plants. Mrs. Daum was proud of her genealogical research. She researched family lineage for both her and Chester’s ancestors. She became a member of the Stephen A. Douglas Chapter, National Society Daughters of the American Revolution, February 1, 1971. In her genealogical research she discovered six relatives that had fought in the Revolutionary War. She served as Regent from 1973-1975.

Mrs. Daum travelled on numerous bus tours throughout the United States, gathering memorabilia along the way which she shared with family and friends. Her adventurous spirit and interest took her to Europe 5 times as well as Canada and Hawaii. Mrs. Daum was 75 years old the last time that she travelled to Europe in 1993. She especially enjoyed touring historical sites when she was in Europe and while travelling throughout the United States.

To order memorial trees or send flowers to the family in memory of Bernice Daum, please visit our flower store.
Send a Sympathy Card