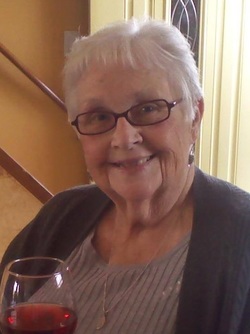 
AUDREY ROZELLA LANDRETH ADAMS KNIERIM, 76, of Cooks Mills, IL passed away at 6:04 A.M. on Tuesday, February 16, 2016 in her home surrounded by her loving family.

She was born April 6, 1939 in Humboldt, IL, the daughter of Ed and Lela Landreth.

Audrey retired from Consolidated Communications in Mattoon, IL. She was a devoted wife, mother, and grandmother. Audrey enjoyed traveling the world and going to car shows with her husband. She was committed to supporting all of her grandchildren and great grandchildren in all of their sports and activities. Her love for her family was felt by everyone, every day of her life. Audrey also enjoyed her monthly dinners with her Humboldt friends at the Coles County Airport and her Arcola Class of 1957.

Audrey courageously battled breast cancer for the last few years of her life. As a result of the breast cancer treatments, she developed an aggressive form of leukemia called AML. After being told she only had three months to live, she became our miracle, and lived for eighteen more months and spent every minute of that time enjoying her husband and family. She was strong and determined to live as long as she could for her family. Finally, she succumbed to the leukemia.

Memorials may be made to Sarah Bush Lincoln Hospice and/or your preferred breast cancer research organization.

To order memorial trees or send flowers to the family in memory of Audrey Knierim, please visit our flower store.