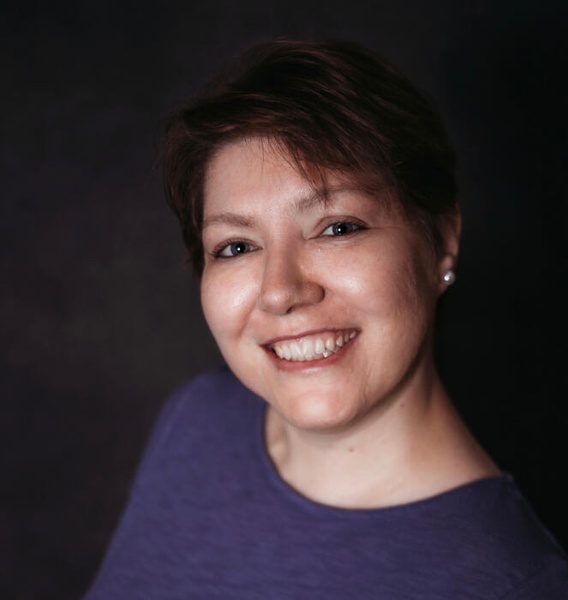 Alina was born on December 11, 1979 in Moscow, Russia, the only child of her parents, Valera and Nina Agalakovi. Her grandparents Yankel and Ida Sapozhnikovi lived in the same apartment. Alina attended a neighborhood school that concentrated on the French language, and her parents hired an English language tutor from the age of 4, beginning her education in foreign
languages. When she was 15, Alina attended a boarding school in Moscow run by American Christians, and there, she learned about Jesus. On Valentine’s Day, she prayed that Jesus’ love would fill her heart, and ever since, Jesus was the greatest love of her life.

Alina entered Moscow State University and graduated with a degree in Cross Cultural Communication, continuing to study English and French. During her student years, she was involved in the ministry of New Life (Cru), and eventually became a youth leader in Moscow Bible Church’s Youth Ministry, 180. It was there, Alina and Brent began their relationship which led to marriage on August 11, 2001. Two children, Ilya (Ilusha) (2003) and Eadie (2005), entered the family and soon afterwards, they sensed God’s closing their Russia ministry. In 2007 they moved to America, first settling in Pennsylvania, then moving to Arcola, Brent’s hometown, in 2013. In the winter of 2011-12, Alina went to Russia for what she calls her greatest personal accomplishment, securing the adoption of baby Ian, completing their family. She built a career in insurance as an account/client manager, passing all the courses to get her insurance license. She had just started a new job with Willis Tower Watson weeks before her sudden death.

Six years ago, Alina was diagnosed with an incurable form of breast cancer and was given 6 months to live, but by the grace of God, a fabulous medical team, a fighting spirit and tremendous love and support around her, the miracle of extended time was used to help her kids grow and to expand the Kingdom of God in the ways unique to her, within the relationships God gave her, near and far. When cancer returned with a sudden and quick vengeance, with her husband and children by her side, her spirit left to be with Jesus on the morning of November 21, 2021. Only big dream was left unfulfilled, doing the “grandma thing”, but her cherished memory will be passed on to generations yet to come.

A celebration of life service will be held on Saturday, November 27 at 11am at the First Christian Church of Arcola, with a visitation from 9:00-11:00, also at the church. The service will also be filmed live online at the Edwards Funeral Home Facebook page. A private burial in the Arcola Cemetery will happen at a later date.

In lieu of flowers, consider memorial donations to Legacy of Hope (Honduras orphan care) through First Christian Church. Or sponsor a child through World Vision (www.worldvision.org).

To order memorial trees or send flowers to the family in memory of Alina Budd, please visit our flower store.