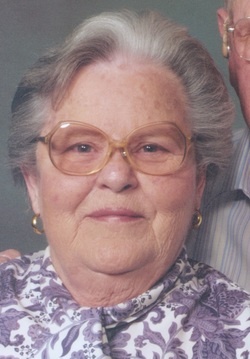 A Graveside Funeral Service was held at 2:00 P.M. on Friday, June 13, 2014 in the Arcola Cemetery in Arcola, IL. Reverend Barry Armour officiated. The Edwards Funeral Home in Arcola assisted with arrangements.

She is survived by her daughter Mitzi Hills and her husband Brian of Arcola, IL; three sisters, L.E. Day and her husband Oliver of Greenwood, IN, Emma Driver and Geraldine East of LaFayette, TN; and one brother Cortess Armour and his wife Georgia of Red Boiling Springs, TN.

She was preceded in death by her husband, two brothers CJ and Miles Armour, and a sister Louise Armour.

Agnes was baptized at Sunrise Missionary Baptist Church in Red Boiling Springs, TN. She enjoyed sewing, crafts, quilting, and gardening, but she especially loved spending time with her family.

To order memorial trees or send flowers to the family in memory of Agnes Stubblefield, please visit our flower store.